“Ring, ring it’s 7am/ Move yourself to go again”

So begins The Clash’s New York inspired Magnificent Seven- incidentally, you can find it on The Clash Hits Back as well as The Clash Sound System, available in all good record stores now. We must have been a bit jetlagged still, because we didn’t need a ringing alarm call. I didn’t mind too much, it was nice to be up and with the whole day in front of us. Eventually, we wandered down for breakfast and I was into the other bagel on the menu, a bacon, egg and cheese delight. I think the bagel on its own was more than enough, but guess what? It came with a side of home fries. I didn’t think I’d ever need to eat again after that.

We set off for Times Square and the first thing we saw on our arrival there, aside from the bright lights (and the construction going on all over the place) was another Levis Store. This time, I was not to be denied. Two pairs of jeans and a denim jacket. As I had spent $250+, I got $100 off my purchases. Steal? I think so.

From there, we set off to Grand Central Station which really has to be seen to be believed. It was probably my favourite sight of the whole week. A beautiful building, with a real sense of space and a world away from the crowded monstrosities we have for our terminals here (though that is beginning to change, most notably, I think, at Kings Cross).

We were going to go to the newly opened Shake Shake, but the line seemed a bit busy and, as I’d only had breakfast about 5 hours previously, I wasn’t particularly hungry. So we headed off to FAO Schwarz to find the famous “Big” piano. Guess what? Yeah, it was big. Museum time then. With our free tickets in hand, we headed off to MOMA. Our first act on arrival was to take a load off whilst looking at a piece called Ventilator. One of the museum employees didn’t like that, so we were up, on our feet again and off round the museum. The highlight of this visit for me, the Philistine that I am, was playing Pac-Man (badly). And a little exhibition of punk photography.

After that, it was time for a beer and a bite to eat in an Irish pub, Connolly’s. We got chatting to a Bangladeshi waiter who didn’t seem as love with the city as we were. Replenished, we set off for the Museum of Natural History. Basically, I just wanted to see their dinosaur skeletons. They were good!

Utterly done in by then, all that was left for me was a date with the biggest hot tub I have ever seen.

Tuesday morning was a bit of a sombre one. After stuffing our faces with breakfast, we walked down to the World Trade Center site to visit the 9-11 memorial. As we were getting ready we could hear (and see) helicopters buzzing around Freedom Tower. We left the hotel and I was unable to shake the feeling we probably should have turned the news on before leaving. Walking down past the Brooklyn Bridge, we discovered that some kind of protest regarding schools was going on. There was a tidal wave of people coming off the bridge.

Finding the 9-11 memorial entrance achieved the impossible in being even more troublesome than the security at the site. Though, obviously, once we found the memorial entrance we couldn’t stop finding it. And you could understand the sensitivity to security down there. Once we were in, well, I can only say that I found the memorial to be a profoundly moving experience. In the noise of the water, cascading down into the basin, Jo could hear the sound of the towers coming down; seeing the water come down in vertical lines evoked the memory of the parallel lines of the towers. The arrangement of the names around the margins of those huge footprints really brought home the scale of human loss inflicted on that September day, 12 years ago. 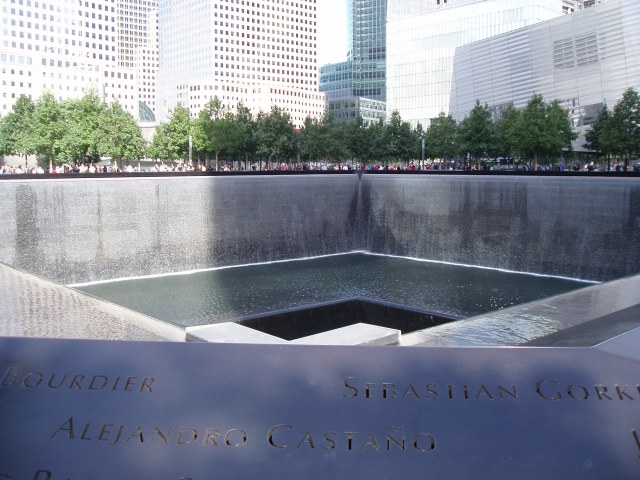 Having collected our thoughts, we then set off for the Staten Island Ferry and a look at the Statue of Liberty. I think the climax to Hitchcock’s Saboteur had given Jo false impressions of Lady Liberty’s size. Or, maybe, we might have been more impressed had we got a little closer to the monument; or not just been up close and personal with a building that stands 1,776 feet tall.

Anyway, the ferry docked and we nipped round to get on a ferry straight back to Manhattan. Having done the Hudson River, we were now ready for fish n’ chips, so we Subwayed to Greenwich Village and A Salt And Battery. Served by a lady with an impenetrable Irish accent, we sat outside eating to the point of bursting. Again. And those were the small portions. It was lovely.

Having returned to the hotel for a while, we headed out into the NYC night. We had a date with the art deco colossus also known as the Empire State Building. I’ll be honest with you, the thought of going to the 86th floor of the building had me in a state of constant agitation. Which wasn’t helped by a bloke who, in the hope of trying to sell us express tickets, told us when we arrived that it was going to be a 90 minute wait to get up there. The lying muthafucka.

We didn’t buy his tickets, nor did we pause in the lobby to take a look at the history of the building. And, before you could believe it, we were on the 86th floor of the building, the city lit up beneath us. It would have been beautiful if I could have extricated myself from the panic I felt rising in me. I decided to try and man up and get outside to have a proper look. Sleepless in Seattle this wasn’t. The wind and crowds on the observation deck that greeted me had me scurrying back inside to, I felt, relative safety. At that point, Jo decided she was heading on up to the 102 floor, so we arranged to meet back at the lifts in ten minutes.

And the minutes passed. Slowly. I couldn’t stay in one spot, so I went wandering- inside, obviously- and so, when Jo came back down and I wasn’t where I said I would be, she assumed it had all got too much for me and went down to find me.

Neither of us had signals on our phones.

Eventually, I realised I was going to have to ask for help as I had no way of knowing whether she was still up there or not. So I asked a guard and he radioed up for me. As he was trying to locate my errant girlfriend, another guard clocked my Sandinista! t-shirt and began telling me all about the 4 Clash gigs he’d been too, including one at their infamous Bond’s Casino residency in 1981. The news came in, no Jo on the top deck, so she’d obviously headed downstairs. I thanked the guards and headed downstairs. As I emerged on the 80th floor, I heard a guard laughing about being asked to find someone called Joanna- how was he supposed to find her? I thanked him for his efforts and told him she had indeed been located.

And then Jo and I were off to Prince St for the best pizza slice in NYC, certified by the Goodfellas crew and various Sopranos cast members. The biggest photo in the shop was taken with James Gandolfini three days before he died. For the record, we loved the pizza and the fold it up New York style of eating it on the run.

That’s the way to do it, I think. Well, maybe not whilst running.